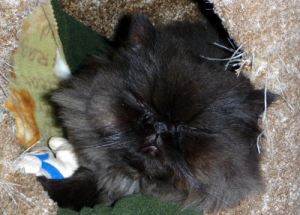 Pearl came to Paws & Claws in the spring of 2010. She was our Persian Princess who loved to perch on the back of chairs and in the front window. She was always full of spunk and sported a lion cut during the summer months. She liked to spend her time curling up in the cat tree nook or any open box she could find. She also loved sitting on the charts the doctors were trying to write up. Pearl was known to crawl onto open laps in the lobby to curl up for a nap, and no one seemed to mind! In early 2016 Pearl lost her long-fought battle with renal failure. She will be forever missed and will hold a special place in our hearts. 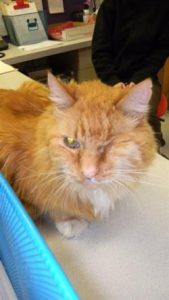 Popeye was abandoned on the front steps of the clinic as a tiny kitten with head trauma in 1996. With a little TLC, and a surgery to remove his damaged eye, he was back in action. He lived with the DeRemers for 2 years, and then moved back to the clinic to greet clients and donate blood if needed. He became a permanent fixture sleeping in his deluxe bed or taking up most of the counter space. He was filled with extra personality, and many of us have the scars to prove it! We sadly lost Popeye in May, 2010. We will all miss him. 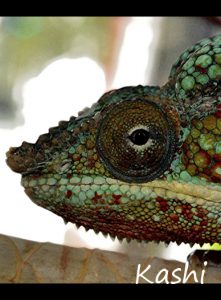 Kashi came to live as a resident at Paws and Claws in early 2011. He was an elderly reptile who needed a little extra love and care. He loved to eat crickets and meal worms, and change colors to hide in his environment. He lived a long and healthy life, but sadly only lived for a portion of it at Paws & Claws. You probably saw him hanging out in his cage near the front desk. While he only lived here for a short part of his elderly years, we were all very sad to see him go. He will truly be missed. 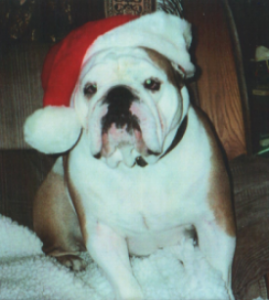 “We first got Brutus at 8 weeks old. He was a little bundle of bundle of joy. He had a heart condition when he was born. You would have never known it. He was the most active, loving dog. We took him anyway and took him to a heart specialist every year when he was little, and then it went to every two years for his check-ups. He loved to go to Paws and Claws to visit everyone. He got so excited; it was hard to calm him down. He loved everyone. Dr. DeRemer took care of his other issues (cherry eye, hernia, allergies, ear infection etc.) He did a terrific job. He cared for him from a baby until he passed away at when he was almost 10 years old. It meant a lot to me to get a call from Dr. DeRemer after he passed, plus a sympathy card in the mail signed by everyone at Paws and Claws. That was a blessing. He was our little love of life. We were heart broken. We miss him so much. I know though that we gave him a good life with lots of love and care.” 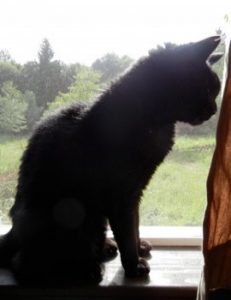 “James adopted Minuit twenty years ago. It was outdoors at night, and he had to use a flashlight to see the kittens. Minuit walked up to the flashlight and bumped his head against it, so James knew he wanted to come home with him. Minuit spent his younger days climbing trees, popping VCR tapes in and out of the machine (that’s how old he is!), and talking. Minuit loved to talk to people! In his later years he liked to lay on a heating pad or on a lap. He helped raise many kittens, dogs, and baby chickens in his 20 years at the Wilson house. Minuit crossed the rainbow bridge but will live in our hearts forever.” 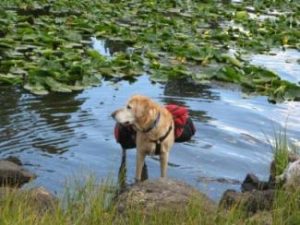 In early October 2002, my daughter, who had just started working in her first veterinary practice after graduation, called me and said in a breathless voice, “Mom, I have a puppy for you!” It turns out that the practice secretary was a breeder-caretaker for Canine Companions for Independence in Santa Rosa, CA, keeping one of their breeding female dogs in her home. One of the puppies in the latest litter was rejected at puppy turn-in time because of an overbite. I bought-out PETCO, loaded my car and headed for Santa Rosa. At first sight, both Hysson and I fell in love!

That was the start of a wonderful almost eleven years, consisting of great joy on my part and unconditional love on Hysson’s part. He was my closest friend, my hiking and backpacking buddy, the source of great happiness and great amusement and lots of dog hair throughout my house! It’s perhaps fitting to note that just before he went to his final sleep, he made truly serious inroads on Paws and Claws’ dog biscuit supply!

Hysson has been a Paws & Claws Patient from the time I brought him home at three months, and I want to thank all from the bottom of my heart for your marvelous care of him over the years! 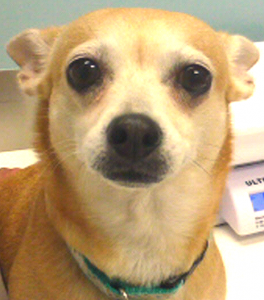 Butters was an amazing and strong-willed dog. This incredible chihuahua loved and adored her mom, who always wanted nothing but the best for her. Butters followed Rosalina around like she was her shadow, never leaving her side. She was her amazing companion, and will always hold a special place in her heart.